Must Haves for Your Travel Bar 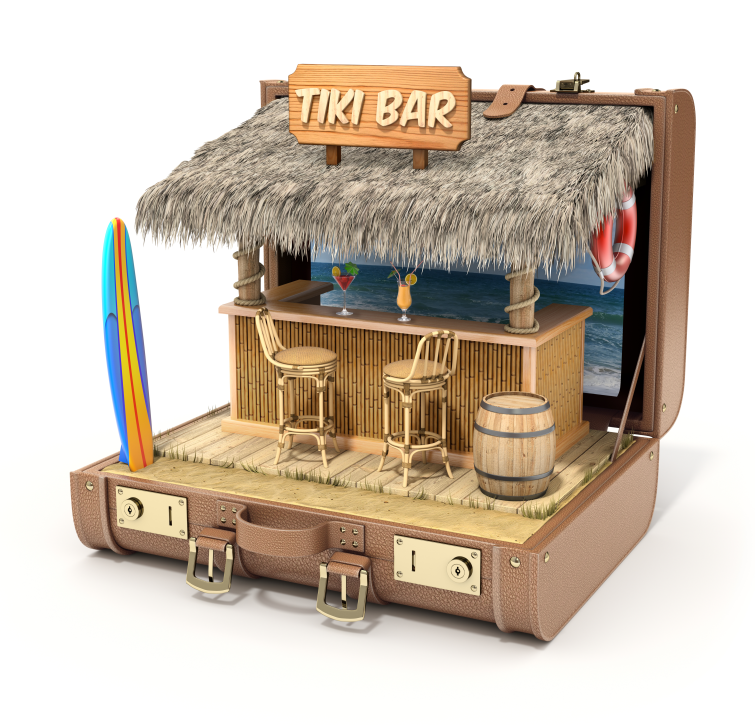 Today I want to share with you the reasons and necessities you must have for a travel bar. Before I get too far, I want to say that you can certainly go on Amazon and pick up an actual travel bar setup with a whole kit of measuring glasses, strainers, spoons, shakers and everything from Barillo or Mixology. That will be great for you for sure if you’re serious about your travel bar, but I’m going to talk about everything around that, in case you are just making due with the bare minimum, like I did.

Why a Travel Bar

In 2020 I had to travel a fair amount and as we all know, the only drinking being done was at home. I’d recently sold my house and that meant for a while I wasn’t going to have a home to set up my bar in. I was going to have to get creative!

I’d pre-arranged to stay at a couple bed and breakfasts, hotels and some timeshares just to spread it out. As you can imagine, none of these rooms or apartments had any bar to speak of. In every city we stayed in, the best you could do (and only rarely) was takeout. Have you ever gotten a martini for takeout? How about a long island iced tea? Doesn’t really hold up. Hell I can’t even stand getting tater tots in a Styrofoam box! They are so soggy and mushy by the time they get to you. Ah but I digress… The answer to my cocktail dilemma was to set up my own bar which I could set up and take down in pretty short order and be easy to take along. After a long day of driving, putting your feet up with a drink sounds pretty darned good.

The good news is most places you’ll stay will have some glasses. Even the hotels we stayed in had kitchenettes at minimum, so you could usually count on a set of tumblers and a set of highball glasses. Of course, this could be a luxury in some places, and you might have to improvise, like at the hotel where the only glasses you get are those two plastic ones with the sanitary wrap which you have to use for your whole stay. Bleh… It might be a good idea to take a set of 4 nesting acrylic glasses with you (dishwasher safe of course).

Let’s say you don’t have a fancy kit to pack with you – so no measuring cups, shakers, strainers or spoons. Now what? Well, who needs that stuff anyway? We’re going to make some simple drinks – mostly because we’re not going to pack around a dozen liqueurs, 6 bottles of bitters, sweetened cherries, and the odds and ends you might have at home. In fact, when I stayed at some rather austere places, I couldn’t even find some grenadine. I was just lucky enough to find an orange, bourbon, and a small bottle of triple sec.

Well, with the meager findings I had that time, I was able to whip up a Travel Old Fashioned. Sure I didn’t have the bitters, but the orange peel makes a good substitute. In a tumbler or old-fashioned glass half full of ice, add:

Orange peel bitters: Peel off about ¼ to ½ of the orange’s skin. Hold the skin over the glass, the outer, orange side down and bend the skin so it releases some liquid. Usually, it sprays out in a very fine mist that is hard to see. Do a fair amount of it so you get a lot of this bitter orange flavor in the glass. If you don’t get much, the white part of the skin can also be bitter, and you could try adding just a bit of that.

Teaspoon of sugar (or part of a sugar packet that came with your coffee): just pour that in the glass.

Add just a teaspoon of water now and stir for a bit so the sugar starts to dissolve just a little. If you had to add the white part of the skin, you might want to muddle it a little to get some of that bitterness out. We’ll finish stirring after…

Oh wait, our other problem is measuring. If you have been pouring drinks for a while you can probably eyeball this well enough. Otherwise, put enough bourbon in the glass with the ice in it to reach about one finger’s width deep. If it’s a real wide glass you might want to adjust down a bit.

You are now ready to stir, stir, stir until that sugar is all dissolved, or at least until you get tired of stirring. You may take one of the sections of the orange and add it for garnish.

Enjoy! If you find there is too much bourbon, try muddling an orange section in there. Not enough bitter? Try a little more orange skin. Might have to experiment with that somewhat.

You might have noticed I didn’t use the triple sec, but that was for the next night when I wanted to try a slightly sweeter version. Same as above but use more of the orange skin to use as the bitters. Then use about 1/3 of the triple sec as you did bourbon, or to put another way, 3 parts bourbon, 1 part triple sec.  This drink I’d only read about on a newsgroup from a guy who called it a Fashion Tennessee.

Most of the time, my ingredients were simpler than this. I’d buy some seltzer, limes, lemons, and vodka and just have simple mixed drinks to take the edge off the day. Other times I’d just want to relax with some irish whiskey or scotch (neat of course).  I did once see some Orange Crush in a hotel vending machine and thought it would be great with some vodka. I really love Crush (or I did 30 years ago when I drank it last), but I had no idea how sweet it’d become with all the high fructose corn syrup it had. That leads me to impart this wisdom.

Don’t Take Shortcuts On Everything

I did take some liberties with a bitters replacement, but I had no business making a drink from Crush. It’s pretty easy to add sweet since you can get sugar just about everywhere but it’s much harder to get bitters in your drinks if you overcompensate.

Likewise, with concentrated lime or lemon juice instead of the whole fruit. Just because we’re traveling doesn’t mean we have to live like animals!

Sometimes a cheaper version of your alcohol isn’t bad either. I don’t mind getting bottom shelf vodka if I’m mixing it. However, if I’m drinking something neat or on the rocks, I can avoid a headache with some well-distilled spirits.

What kinds of things to you like to drink when you’ve had a long day of driving? Do you pack a complete travel bar kit wherever you go? Check us out on social media and share some of your stories!